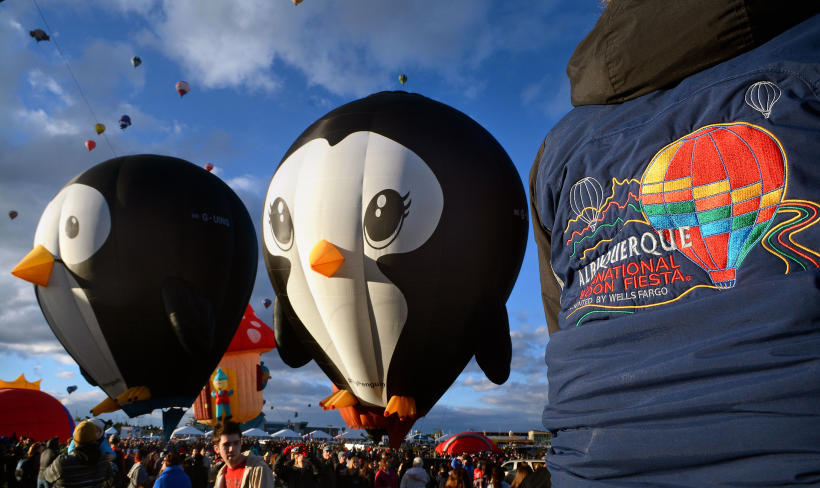 “Puddles” and “Splash” finally made it to the Albuquerque Balloon Fiesta, with not a minute to spare.
The two penguin special shape balloons and “Pirate Ship,” one of the largest hot-air balloons in the world, disappeared more than a week ago.
As the fiesta got underway, the balloons’ pilots frantically searched for them, but nary a penguin squawk nor pirate’s “Arrrr” could be heard.
British pilot and owner Andrew Holly said Friday night that the balloons were shipped from Bristol, England, in August.
“We checked on their progress, and the shipping company gave us confirmation that they were delivered Sept. 24 to Balloon Fiesta Park,” he said.
Holly and the other pilots, Andy Collett and Lee Hooper, arrived on the Friday before the fiesta started, only to discover that the balloons were nowhere to be found.
To make matters worse, they were not getting much response from the shipping company, which Holly declined to name.
“We were pretty angry. It was the perfect weekend, and we lost a lot of publicity and good flying,” he said of the first weekend. “We were hoping maybe they were in a warehouse in Albuquerque.”
On Monday, Holly and his crew spent the day trying to trace the location of the balloons. “Finally, the shipping company responded and said they had been in New York and were in transit to Albuquerque and would be here Tuesday.”
Meanwhile, Holly and crew had a little lighthearted fun by recording and posting a video modeled after a missing child appeal.
“This is a direct appeal to the good people of Albuquerque to help us find our missing penguins … . We are particularly concerned for their safety as the Exclusive Ballooning Pirate Ship was also seen in the vicinity making its way to Albuquerque. … Puddles, Splash, if you can hear us, we are not angry with you and you are not in trouble; we just miss you and want you to come to Balloon Fiesta Park here in Albuquerque.”
Finally, on Wednesday, the shipping company told Holly that the balloons were in Los Angeles.
“At that point, I got British lawyers involved, and suddenly the shipping company was helpful and they had the balloons overnighted to Albuquerque.”
Not quite the happy ending.
“A lot of things were damaged,” particularly the envelope of the Pirate Ship, “which looks like a forklift went through the travel bag,” said Holly.
Still Puddles, Splash and Pirate Ship were able to inflate for the Friday morning Special Shapes Rodeo and the Friday night Special Shapes Glowdeo after temporary repairs were made.
Which just goes to show, you can’t keep a good penguin down, even in the face of pirates.