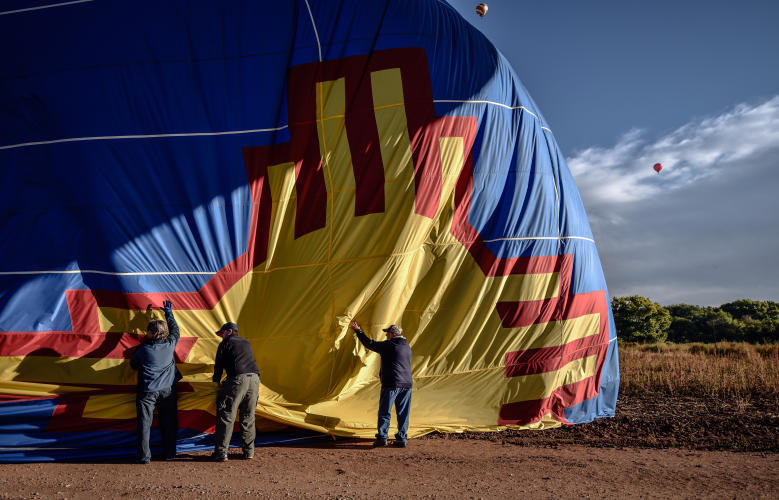 So many things could go wrong, he thought.
That’s what happens with these lofty romantic ideas. One thing goes awry and the whole plan goes kaput.
But this had to be perfect, Eugene Visarraga insisted. Because Savanna Perdomo, his girlfriend, was perfect. And finally, after seven years and three children together, he was going to ask her to marry him.
It was about time.
“I couldn’t wait any longer,” he said.
So he thought about how he wanted to propose. He’d get a ring. He’d get down on one knee. He’d do all that, but where? How?
As the summer faded to September and October loomed, it came to him:
He’d do it in a hot-air balloon.
“I’ve always wanted to do something like that,” the 27-year-old Albuquerque barber said. “I’ve loved balloons since I was a kid.”
So had Perdomo.
As a child, she had watched the brilliant balls of color bob along in the crisp blue autumn sky above her home, especially during the Albuquerque International Balloon Fiesta.
“I always thought they were so beautiful,” the 29-year-old pharmacy worker said.
She was a third-grader at Los Ranchos Elementary School when she tried her hand at designing her own beautiful balloon. Her design – a yellow and red Zia symbol on a crisp blue background like the autumn sky – was entered in a contest sponsored by her school and the North Valley Optimist Club through the Join-A-School program.
She won. Another student came up with the winning name: Sun Flyer.
“Back then, I don’t think I really realized what was going on until the year they made my design into an actual hot-air balloon and launched it at my school,” she said. “And that’s when I realized, oh gosh, I designed that.”
From then on, the Sun Flyer became her balloon – although in reality it’s owned by Frank Bacon and Bill Douglas of Albuquerque.
When she was older, Perdomo attended Balloon Fiesta mass ascensions and searched for her balloon.
“She’d always come by and say hello,” Bacon said. “It was always great to see her.”
Perdomo had her first child, Dominic, nine years ago. Two years later, she met Visarraga. Three more children followed – Asia, 7, and 5-year-old twins Dylan and Aaliyah. Every year, Perdomo and Visarraga took the kids to the Balloon Fiesta to track down the Sun Flyer and introduce their growing family to the pilots and crew.
“It became our family tradition,” she said.
So, of course, the proposal had to include the Sun Flyer.
“Her boyfriend contacted me, told me what he wanted, and I said, well, sure, we can work something out,” said Bacon, who at 75 still pilots the balloon with son Josh Bacon. Douglas has retired from ballooning.
But there was one little problem: Visarraga is afraid of heights.
“I love balloons, always wanted to be in a balloon, but I’ll never be in a balloon,” he said.
So instead, he had a banner made with the words “Savanna Will U Marry Me” that would be unfurled from the Sun Flyer gondola at the right moment. He contacted family members and asked them to be at the balloon at the right moment, just before the balloon launched during the mass ascension Sunday, the second day of this year’s Balloon Fiesta. He prayed for good weather.
He prayed he could keep his big secret from Perdomo.
“It was stressful,” he said. “It’s hard to keep things from her. She knows me too well.”
But on Sunday, everything went right.
And she said yes.
“It was perfect,” Perdomo said. “He’s not usually such a romantic. I totally had no idea. I thought he had planned a balloon ride for me.”
About that. Despite her love of the Sun Flyer, she has never taken a ride in it. Bacon said he is willing to remedy that.
“We’d be happy to give her a ride,” he said. “But after Balloon Fiesta.”
She’ll take him up on that. For now, though, she is busy planning a wedding. That’s a ride of a lifetime.